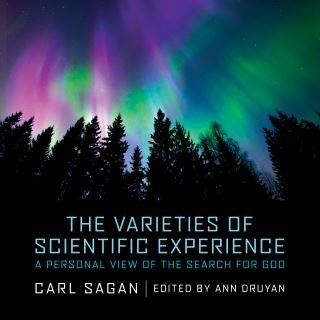 The Varieties of Scientific Experience

A Personal View of the Search for God

The late great astronomer and astrophysicist describes his personal search to understand the nature of the sacred in the vastness of the cosmos. Exhibiting a breadth of intellect nothing short of astounding, Sagan presents his views on a wide range of topics, including the likelihood of intelligent life on other planets, creationism and so-called intelligent design, and a new concept of science as "informed worship." Originally presented at the centennial celebration of the famous Gifford Lectures in Scotland in 1985 but never published, this book offers a unique encounter with one of the most remarkable minds of the twentieth century.

Introductory music from the original score for COSMOS: A SpaceTime Odyssey composed by Alan Silvestri, used with permission from Cosmos Studios, Inc. and Chappers Music. All rights reserved. Special thanks to Fuzzy Planets, Inc.

Carl Sagan: Carl Sagan (1934-1996) was the Director of Cornell University’s Laboratory for Planetary Studies. He played a leading role in the American space program and was an adviser to NASA since its inception. He briefed the Apollo astronauts before their flights to the Moon, and was an experimenter on the Mariner, Viking, Voyager, and Galileo expeditions to the planets. He helped solve the mysteries of the high temperatures of Venus (answer: massive greenhouse effect), the seasonal changes on Mars (answer: windblown dust), and the reddish haze of Titan (answer: complex organic molecules). For his work, Dr. Sagan received the NASA medals for Exceptional Scientific Achievement, and the Pulitzer Prize for The Dragons of Eden. His 1980 television series Cosmos: A Personal Voyage won the Emmy and Peabody awards. The National Science Foundation declared that his “research transformed planetary science… his gifts to mankind were infinite.”