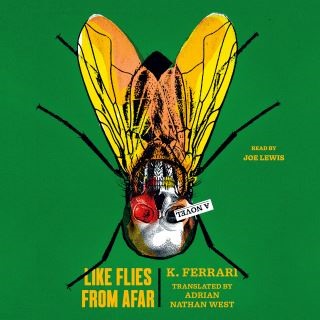 The first novel to appear in English by the "subway janitor by night, novelist by day," who began his writing career while an undocumented immigrant in the United States, Like Flies from Afar will demonstrate why K. Ferrari is already an award-winning star of international crime fiction. A hardboiled noir thriller, a whodunit, a black comedy, and a filthy catalog of the excesses of wealth, this is a Jim Thompson novel for the globalized world.

Mr. Luis Machi is an unforgettably loathsome and hilarious Argentinian oligarch who made his fortune collaborating with the worst elements of society—parasites, pushers, and secret policemen. He has a cocaine habit, a collection of three hundred ties, ten million dollars in the bank, and a bloody corpse in the trunk of his BMW...but as far as the body goes, he's completely innocent. He has no idea who the victim could be, or who among his many, many enemies might be trying to frame him for murder, and he doesn't have much time to find out...

The profane and uproarious Like Flies from Afar follows Machi through twenty-four hours of his eventful life—one full day in which to solve this mystery, or at least to make sure he isn't the one to take the fall.

A Macmillan Audio production from Farrar, Straus and Giroux

"This novel should come not with blurbs but with a hazardous-material warning: There's bone and gristle here, be ready for that taste in your mouth you can't spit out. First words to last, it's strong stuff." —James Sallis, author of Drive

K. Ferrari: K. Ferrari was born in Buenos Aires in 1972. He is the author of more than five novels, including Like Flies from Afar, collections of short fiction, and a book of nonfiction. Ferrari works as a janitor for the Buenos Aires metro at the Pasteur-Amia station on line B. In the 1990s, he was deported from the United States, where he and his wife were trying to find work.