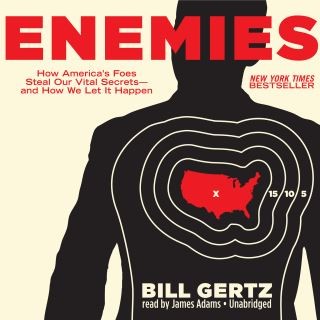 It’s the great untold story of the war on terror. Taking advantage of gaping holes in America’s defenses, terrorist organizations and enemy nations like Communist China, North Korea, Russia, and Cuba—not to mention some so-called friends—are infiltrating the US government to steal our most vital secrets and use them against us. In his explosive new book, Enemies, acclaimed investigative reporter Bill Gertz uncovers the truth about this grave threat to our national security and America’s harrowing failures to address the danger. Gertz’s unrivaled access to the US intelligence and defense communities allows him to tell the whole shocking story, taking us deep inside the dark world of intelligence and counterintelligence—a world filled with lies, betrayal, and moles burrowing within the FBI, the CIA, the Pentagon, and even the White House.

Bill Gertz is geopolitics editor and a national security and investigative reporter for the Washington Times and the author of four New York Times bestsellers, including Treachery, Breakdown, and Betrayal. He has lectured at the FBI Academy and the National Defense University. He is married and has two daughters.