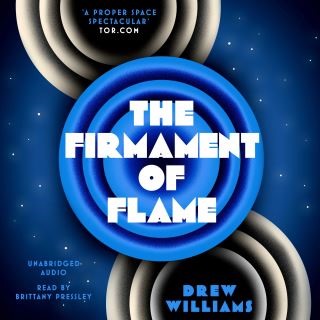 The Firmament of Flame

The explosive conclusion to the epic saga that started with THE STARS NOW UNCLAIMED, the space opera SFX calls 'a glorious romp'!
Always outnumbered, always outflanked.
That’s the motto of the Justified, the small band of mercenaries who are determined to set the universe to rights after accidentally unleashing a cataclysm upon it.
Find the fight before it finds you.
But they’re not the only people who are trying to change the order of the universe. A group of psychotic beings, the Cyn, seem determined to stop the Justified.
Hit them before they hit you.
This little band of heroes are going to have to travel to the farthest reaches of the universe in order to stop the Cyn and save the world. But there’s a balance to the universe… and they’re just about to upset it. Hard.

*** Praise for Drew Williams and the Universe After series ***

‘A proper space spectacular, the love child of Destiny and StarWars, raised by Firefly on a steady diet of Resident Evil… The dialogue is snappy and the jokes are laugh out loud: an escapist, gleeful, explodey space opera’ Tor.com

'Pirates, smugglers, soldiers, spies, snarky spaceships, and really big guns . . . and that's just the first chapter. The action gets bigger, the stakes get higher, and I loved it!' Claire North, author of The First Fifteen Lives of Harry August

Drew Williams:
DREW WILLIAMS has been a bookseller in Birmingham, Alabama since he was sixteen years old, when he got the job because he came in looking for work on a day when someone else had just quit. The Stars Now Unclaimed - described by SFX as 'a glorious romp' - was his debut novel, followed by sequels A Chain Across the Dawn and The Firmament of Flame.