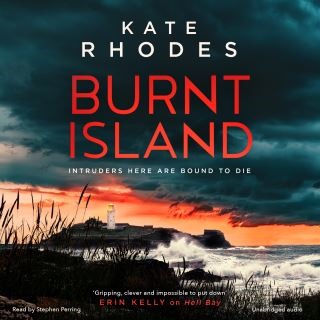 The third instalment in a gripping and atmospheric crime series set on a small island where there is no escape . . .

‘Gripping, clever and impossible to put down' Erin Kelly

Intruders here are bound to die . . .

As the sun sets on a cold November evening, the tiny community of St Agnes prepares for their annual Fifth-of-November festivities. Moments before the fireworks are scheduled to commence, an islander discovers a charred body left on the bonfire, and quickly it becomes clear that a killer is at large.

Ben Kitto is the Deputy Chief of Police for the Scilly Isles, and with a killer on the loose, he has no choice but to forbid all residents from leaving the island. With a population of just eighty people, everyone is a suspect and no one is safe.

When threats start appearing, written in the old Cornish language, Ben suspects that the killer’s motive is to rid the island of the newcomers who threaten their traditions. With time running out, Ben hurries to discover the secrets of the island’s peculiar residents, but he knows it’s only a matter of time before another fire is started . . .

‘Gripping, clever and impossible to put down. I’ve been a Kate Rhodes fan for years and in Ben Kitto she has created a detective who is just as complex and compelling as Kate’s elegant plotting and stunning prose. The claustrophobia and paranoia of the island are so brilliant evoked, I could almost feel the tide encroaching as time ran out to find the killer' Erin Kelly

'Beautifully written and expertly plotted; this is a masterclass' Guardian

'Rhodes does a superb job of balancing a portrayal of a tiny community oppressed by secrets with an uplifting evocation of setting' Jake Kerridge, Sunday Express

‘The whole book tingles with tension. I hope it does for the Scilly Isles what Ann Cleeves did for Shetland' Mel McGrath

'I love reading Kate's books in the way I love reading Sophie Hannah – a poet writing crime fiction is a great thing . . . It is at once a locked-room mystery, a story of the returning hero, and an examination of fear and abuse. It has the air of a twenty-first century Agatha Christie' Julia Crouch

Kate Rhodes:
Kate Rhodes is an acclaimed crime novelist and an award-winning poet. She lives in Cambridge with her husband, the writer and film-maker, Dave Pescod. She visited the Scilly Isles every year as a child which gave her the idea for this new series. She is one of the founders of the Killer Women writing group.