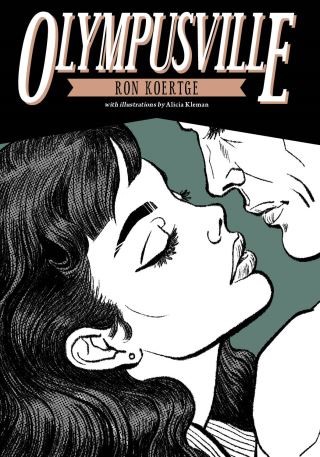 Imagine a heaven populated by familiar Greek gods. Sexy Aphrodite, gorgeous Adonis, Ares the warmonger, Artemis the huntress, wise Athena, bitter Demeter, and the like. But imagine also each of these denizens of Olympus stepping forward and revealing qualities that any reader can recognize: Hades, ruler of the underworld, lovesick for Persephone. Baffled Hephaestus, god of fire, husband of Aphrodite who can’t keep her clothes on. Add a defiant Sisyphus and a cadre of grumpy water nymphs and those are only some of the inhabitants of Olympusville—a fantastic and, in the hands of poet Ron Koertge and illustrator Alicia Kleman, endlessly intriguing world. Featuring 16 black and white ink illustrations.

Ron Koertge: Ron Koertge teaches at Hamline University in their low-residency MFA program for Children’s Writing. His recent books of poetry include Fever (Red Hen Press, 2007), Indigo (Red Hen Press, 2009), Lies, Knives, and Girls in Red Dresses (Candlewick Press, 2012), The Ogre’s Wife (Red Hen Press, 2013), and Vampire Planet (Red Hen Press, 2016). Koertge also writes fiction for teenagers, including many novels and novels-in-verse: The Brimstone Journals, Stoner & Spaz, Strays, Shakespeare Bats Cleanup, Shakespeare Makes the Playoffs, and Coaltown Jesus. All were honored by the American Library Association, and two received PEN awards. He is the recipient of grants from the NEA and the California Arts Council and has poems in two volumes of Best American Poetry. He lives in South Pasadena, California.