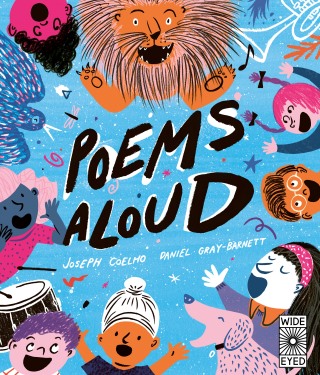 An anthology of poems to read out loud

Poems are made to read OUT LOUD!

A wittily illustrated anthology of poems, designed to be read aloud. Twenty poems by the award-winning Joseph Coelho arm children with techniques for lifting poetry off the page and performing with confidence.

Perfect for confident children and shy readers alike, this book teaches all sorts of clever ways to performing poetry. Children will learn 20 techniques for reading aloud by trying out 20 funny and thoughtful original poems by the much-loved and award-winning performance poet, Joseph Coelho. There are tongue twisters, poems to project, poems to whisper, poems to make you laugh. There are poems to perform to a whole class and others to whisper in somebody's ear. Richly textured, warm and stylish illustration by Daniel Gray-Barnett bring each page to life.

"Poetry for children is dead. Really? Not when there are young poets like Joseph Coelho" —Books for Keeps

Joseph Coelho: Performance poet and playwright Joseph Coelho has written plays for the Polka Theatre, the Lyric Hammersmith, and the Unicorn Theatre. He performs his poetry shows with the U.K.'s top performance poetry organization, Apples and Snakes, visiting venues across the nation. His poems have appeared in many anthologies, including Green Glass Beads and The Works 6. He lives in Kent, U.K.

Joseph Coelho is an award winning poet and performer from London, although he now lives by the sea. In 2019 he won the Independent Bookshop Week Picture Book Award for If All the World Were. He has been long-listed for The Carnegie Children's Award with his poetry collection 'Overheard In A Tower Block', which was also shortlisted for the CLPE CLiPPA Poetry Award and Longlisted for the UKLA Book Awards. He won the 2015 CLPE CLiPPA Poetry Award with his debut poetry collection Werewolf Club Rules. His debut Picture Book, Luna Loves Library Day was voted one of the nations favourite picture books by a survey led by World Book Day. His other poetry books include How To Write Poems and A Year Of Nature Poems .

He has written plays for companies including: Soho Theatre, Polka Theatre, The Unicorn Theatre, Theatre Royal York, Oily Cart and The Spark Children's Festival to name a few.

Joseph has been a guest poet on Cbeebies Rhyme Rocket, Radio 4's Poetry Playtime and Front Row. He is the presenter of BBC's Teach Poetry (Oct 2018) and features in DiscoveryEDUK's Poetry Curriculum

Daniel Gray-Barnett is an Australian illustrator and author based in Tasmania. HE has illustrated 4 books for children, including the award winning debut, Grandma Z. His illustrations have been commissioned by clients such as The New York Times, Sydney Opera House, The Boston Globe, The New Yorker, Warner Music, and The Museum of Contemporary Art Australia. His work has been shown internationally and has been awarded by the Society of Illustrators NY, Communication Arts and 3x3 magazine.