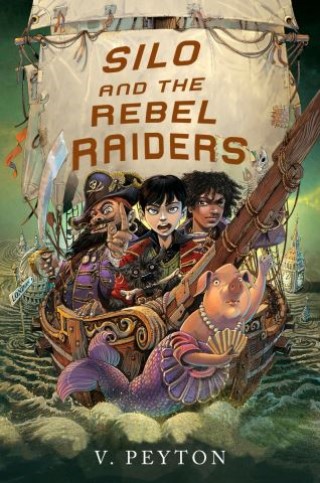 Silo and the Rebel Raiders

Ten-year-old Silo Zyco hasn’t had the easiest start to life.

His father was (probably) ‘Aquinus the Accursed’ - wanted for dog-theft, whereabouts unknown.

His relatives all perished in a disaster involving a terrible wave and lots of mud. All he has inherited is the family reputation for thieving, and webbed feet.

And his only friend has been killed, tragically mistaken for a large rodent.

But Silo does have one thing that others envy. He can see things. Things that will happen in the future. And the people in the Capital are looking to recruit children just like him.

An incredible adventure is about to begin . . .

Veronica Peyton: V. Peyton was raised in an obscure Essex village and moved to London as soon as was feasibly possible. She was a graphic designer for a while then taught English in a variety of unglamorous foreign locations, mostly in Asia. She turned to writing after a five year stint in Holloway Prison (as a librarian not an inmate).