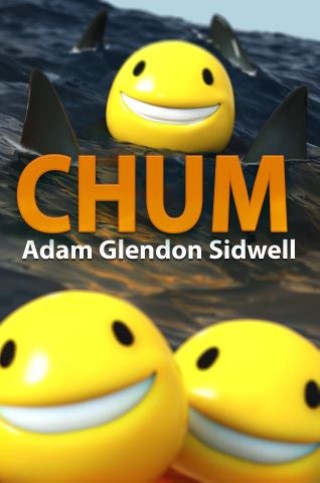 Thirteen-year-old Levi Middleworth insists he’s got a Destiny, even if half the internet’s tried to bully it out of him with a viral video. When a Hollywood executive in a trim green suit invites Levi to star on a reality TV show aboard a hi-tech pirate ship, Levi thinks his destiny’s finally come a knockin’—a bit of fame is exactly what he needs to finally make some friends his eighth-grade year. But almost as soon as they set sail, the games aboard the ship turn savage, and he and his new bud Holly must do everything they can to find themselves some Chums—little round-headed autonomous toys—since failing to do so means getting thrown to the sharks.

With the help of Levi’s long-lost television hero and a tech-savvy pirate crew, Levi has to rethink his quest for fame in an attempt to save himself, his fellow contestants, and every human being on the beach from a feeding frenzy of grisly proportions.

In between books, Adam Glendon Sidwell uses the power of computers to make monsters, robots and zombies come to life for blockbuster movies such as Pirates of the Caribbean, King Kong, Pacific Rim, Transformers and Tron. After spending countless hours in front of a keyboard meticulously adjusting tentacles, calibrating hydraulics, and brushing monkey fur, he is delighted at the prospect of modifying his creations with the flick of a few deftly placed adjectives. He once showed a famous movie star where the bathroom was.

Adam wrote every single word in the EVERTASTER series, the picture book FETCH, and the unfathomable CHUM. Now he's written the first book in the new Super Dungeon series.