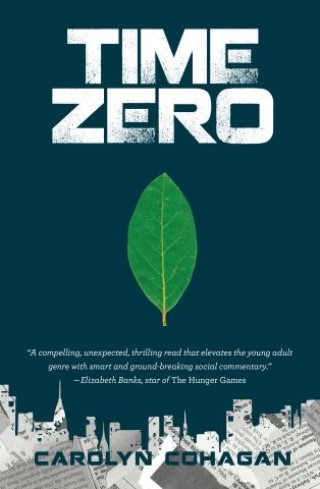 Fifteen-year-old Mina Clark lives in a future Manhattan that is ruled by extremists. Girls aren’t allowed to get an education, they need permission to speak to boys, and all marriages are negotiated by contract. But Mina’s grandmother has secretly been teaching her to read, leading Mina down a path of rebellion, romance, and danger that not only threatens to destroy her family’s reputation, it could get Mina killed. Suspenseful and empowering, Time Zero is about what it’s like to be powerless, underestimated, and manipulated and what it takes to go against society to assert who you actually want to be.

Carolyn Cohagan: Carolyn Cohagan has an extensive theater background. She has performed stand-up and one-woman shows at festivals around the world from Adelaide to Edinburgh. Her first novel, The Lost Children (Simon & Schuster, 2010), became part of the Scholastic Book Club in 2011 and was nominated for the 2014 Massachusetts Children's Book Award. After two decades of living in New York and Los Angeles, she returned to her hometown of Austin, TX, to found the creative writing organization Girls With Pens, which is dedicated to fostering individual voices and offbeat imaginations. Visit her at www.carolyncohagan.com.