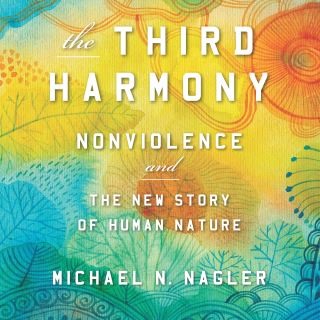 Nonviolence and the New Story of Human Nature

In the latest fruit of a brilliant career, Michael Nagler argues that nonviolence—not just as a tactic but as a way of being—is the only way to unite deeply divided people and enable progressive movements and leaders of all stripes to fulfil their promise and potential.

So many of the problems that beset us—war, poverty, isolation, and the climate crisis—have their roots in an old story about the universe: we are purposeless matter in a random void, and scarcity, competition, and violence are inevitable. Citing the convergence of modern science and the essence of the world's wisdom traditions, Michael Nagler argues for a new story: the universe is conscious and purposeful, humans are spiritual beings, and cooperation and collaboration are our natural way of interacting. This “new story” has had other champions, but Nagler is the first to realize that a piece is missing. For the new story to take hold, we have to embrace nonviolence, not only as a social change tactic but as a way of life.

Nonviolence is the only power strong enough to “move the heart” toward this deep and revolutionary change in worldview. Nagler refers to this as the “third harmony,” which is the harmony within and among us to resolve the crisis of the human image. Calling on us to realize the urgency of nonviolence for resolving our personal and collective problems, Nagler focuses on how to shift to our story on a personal, everyday level and then integrate it into the very foundations of our understanding of humanity and community, for our sake, for the sake of future generations, and the sake of nonviolence itself.

Michael N Nagler , Ph.D.: Michael Nagler is president and cofounder of the Metta Center for Nonviolence and is one of the most respected scholars and advocates of nonviolence worldwide. He also founded the Peace and Conflict Studies Program at University of California, Berkeley, where he is a professor emeritus of classics and comparative literature. He is the author of The Nonviolence Handbook, Our Spiritual Crisis, and The Search for a Nonviolent Future, and his writing has appeared in the Wall Street Journal and elsewhere.