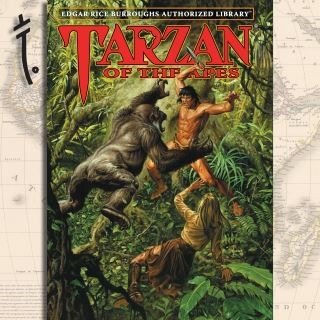 Tarzan of the Apes

Men were indeed more foolish and more cruel than the beasts of the jungle! How fortunate was he who lived in the peace and security of the great forest!

In the late 19th century, a group of travelers become marooned in the coastal jungles of equatorial Africa. Among the group, John and Alice Clayton give birth to a boy, but soon misfortune strikes and both parents sadly die. A she-ape named Kala adopts the young orphaned boy and names him Tarzan. Thus is born the beginning of the Tarzan Legacy!

Edgar Rice Burroughs: Edgar Rice Burroughs was an American fiction writer best known for his celebrated and prolific output in the adventure and science-fiction genres. Among the most notable of his creations are the jungle hero Tarzan, the heroic Mars adventurer John Carter, and the fictional landmass within Earth known as Pellucidar.