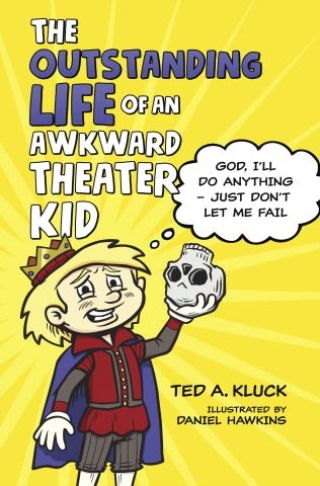 The Outstanding Life of an Awkward Theater Kid

Can Flex Deal with the Drama?

Flex is a football player, not an actor. But he can fake it if it means getting to see KK, the girl he’s dating (sort of—it’s complicated), every day after school for about a month.

This play isn’t for the weak, though. First, Flex has to deal with his nemesis, Actor Boy, the guy who greets girls with kisses on either cheek. C’mon, dude. Really?!?

Then there’s the whole Shakespeare thing. What was “Bill” thinking when he wrote this gobbledygook? Thou dost protest…seriously.

Meanwhile KK is hanging out with Watson, the King of the Youth Group, and no amount of video game playing is going to make Flex feel okay about that. He’d better get his jealousy in check before KK checks out on him for good.

But with some encouragement from Mimi and Pops (his mom and dad), a little advice from an unlikely ally, and a whole lot of truth from God’s awesome book, Flex might just turn his fear of failure into a performance befitting of the bard himself. Or at the very least, get KK to return his texts.

Ted Kluck is an award-winning writer whose work has appeared in ESPN the Magazine, USA Today, and ESPN.com. He’s the author of several books, including Why We’re Not Emergent: By Two Guys Who Should Be, coauthored with Kevin DeYoung. Ted lives in Tennessee with his wife Kristin and their two sons, Tristan and Maxim. www.tedkluck.com

Daniel Hawkins is a freelance graphic designer and illustrator based in the Pacific Northwest. He earned his BFA in applied visual arts from Oregon State University. In addition to serving the worldwide mission of the Nike Foundation, he has worked as an independent contractor for a variety of local, national, and global organizations. www.dhawkdesign.com