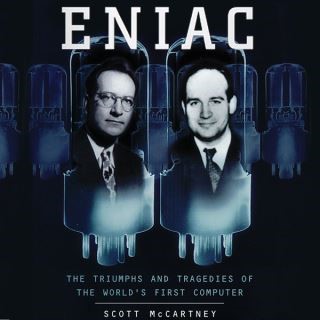 The Triumphs and Tragedies of the World’s First Computer

The true father of the modern computer was not John von Neumann, as he is generally credited. That honor belongs to the two men, John Mauchly and Presper Eckert, who built the world's first programmable computer: the legendary ENIAC (Electronic Numerical Integrator and Computer).Their three-year race to create the ENIAC is a compelling tale of brilliance and misfortune that has never been told before.

Mauchly and Eckert developed a revolutionary vision: to make electricity "think." Funded by the US Army, the team they led constructed a behemoth the size of a three-bedroom apartment. It weighed thirty tons, cost nearly half a million dollars—plus $650 an hour to run—and had eighteen thousand vacuum tubes with miles of wiring. But in 1945, the ENIAC was the cutting edge in technology and a herald of the digital age to come,blazing a trail to the next generation of computers that quickly followed.

Based on original interviews with surviving participants and the first study of Mauchly and Eckert's personal papers,ENIACis a dramatic human story and a vital contribution to the history of technology that restores to the two inventors the legacy they deserve.

Scott McCartney is an award-winning staff writer for the Wall Street Journal. He won the Online News Association Award for online commentary in 2003 for “The Middle Seat” and the George Polk Award for transportation reporting in 2000. He has also been honored by the Deadline Club and the New York chapter of the Society of Professional Journalists. He is also the author of Defying the Gods: Inside the New Frontiers of Organ Transplants and coauthor of Trinity’s Children: Living Along America’s Nuclear Highway. He lives in Dallas, Texas.

Adams Morgan is a theater-trained actor who has appeared in venues around the United States. He has also narrated for National Public Radio and performed radio dramas and historical reenactments. He lives in New York City.